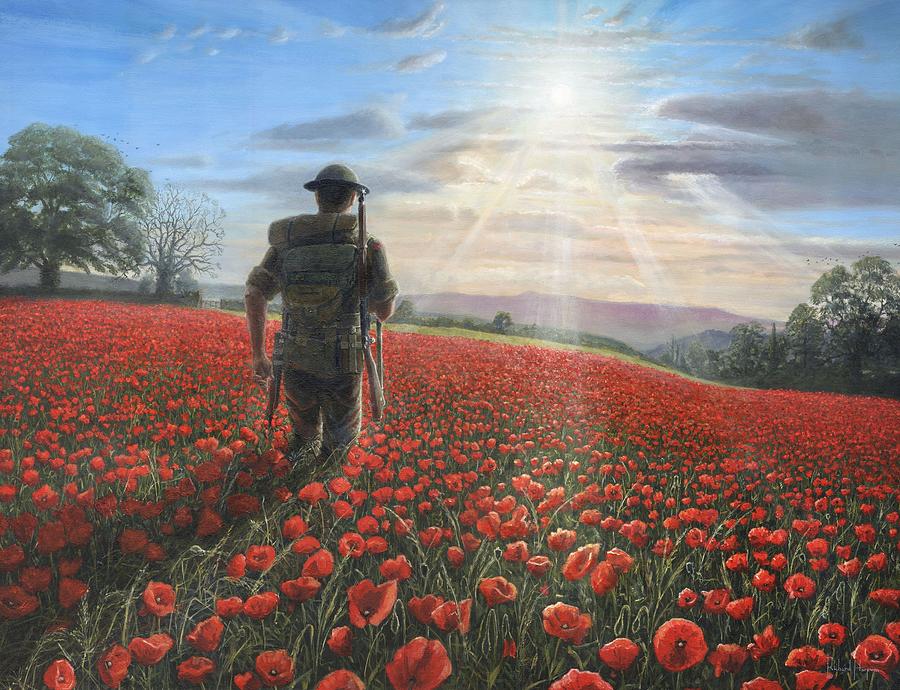 Tommy is a painting by Richard Harpum which was uploaded on September 8th, 2011.

Tommy depicts a WW1 soldier wading through a field of poppies in France some time during the 1914 - 1918 Great War. I was inspired to paint this... more

This piece has been already sold.   Please feel free to contact the artist directly regarding this or other pieces.

"Tommy" depicts a WW1 soldier wading through a field of poppies in France some time during the 1914 - 1918 Great War. I was inspired to paint this when I was told by a visitor to my stand at an art show that 2011 was the Royal British Legion's 90th Anniversary. The visitor saw some of my poppy paintings and suggested that I should donate part of the sale proceeds to the Legion. I thought that I would go one better and donate a special painting for auction, along with the proceeds from the sale of prints and cards.
The original idea for this painting had already come to me when I was watching the 2007 movie "Atonement", in which there is a brief scene of a soldier walking through a poppy field during the retreat to Dunkirk in 1940. My wife said at the time that this would make a good painting. I decided that in keeping with the British Legion's anniversary and John McCrae's famous poem "In Flanders Fields" that inspired the poppy as a symbol of remembrance, a WW1 soldier would be more appropriate.
Most of the painting is created out of my imagination but I carried out extensive research on British Army uniforms from the period and used reference photos of myself for the soldier's pose, along with others from the extensive photo library I have built up over the years. I also took additional poppy photos in the local fields during June.
I then sketched the overall concept on paper using golden sections (1: 1.618) to position the sun, soldier and horizon.
Because I was making things up as I went along, I made numerous changes. I also added a dead oak tree on the horizon to represent an omen of the possible horrors to come, along with the birds taking flight at the sight of Tommy.
My hope is that this painting will be thought-provoking. It is my intent to leave it to the observer to ponder where Tommy may be heading and whether he is advancing or retreating. I also hope that it will remind people of the horrors of war and of the importance of remembering those who have made the ultimate sacrifice.

In Flanders Fields
By John McCrae, May 1914
In Flanders fields the poppies blow
Between the crosses, row on row,
That mark our place; and in the sky
The larks, still bravely singing, fly
Scarce heard amid the guns below.
We are the Dead. Short days ago
We lived, felt dawn, saw sunset glow,
Loved and were loved, and now we lie
In Flanders fields.
Take up our quarrel with the foe:
To you from failing hands we throw
The torch; be yours to hold it high.
If ye break faith with us who die
We shall not sleep, though poppies grow
In Flanders fields.

ORIGINAL SOLD. PRINTS AVAILABLE FROM FAA PRINT ON DEMAND OR FROM THE ARTIST