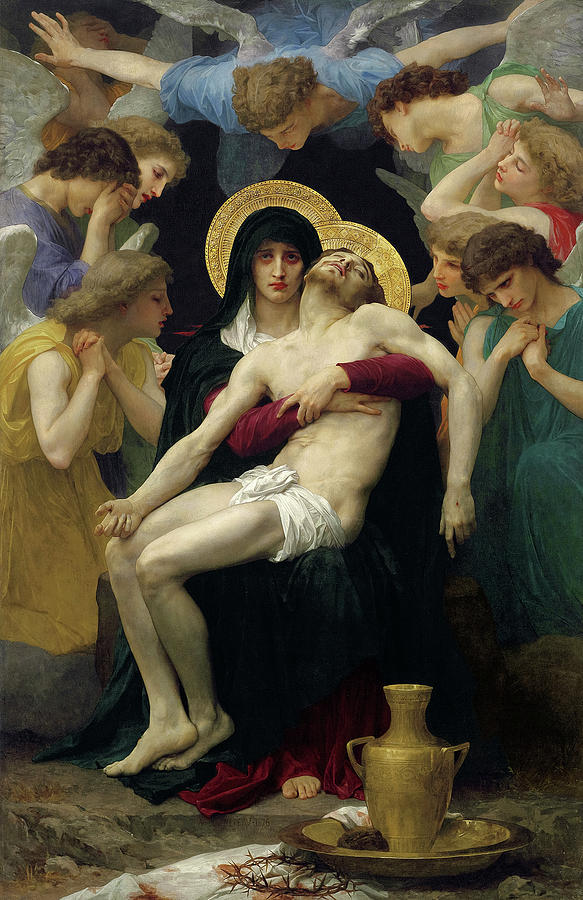 The Pietà, 1876, provides a very unique depiction of this most famous of imagery. The weeping Mary cloaked in a robe of black is mourning the death... more

The Pietà, 1876, provides a very unique depiction of this most famous of imagery. The weeping Mary cloaked in a robe of black is mourning the death of her son whom she holds to her chest. The dead body of Jesus limply hangs in her arms while eight weeping angels surround them. The angels are clad in the colors of the rainbow and create an arc over Mary and Jesus. In the Old Testament, after the great flood had ended, Noah and his family saw an arcing rainbow, which was a sign from God that the flood was over and the world could be born anew. In Bouguereau's Pietà, the rainbow symbolizes that the sacrifice of Jesus was complete and that the human soul can be born anew and ascend to God after death. Mary looks out and up. It is intended to be unclear whether if from her seated position she is focused on the viewer or the heavens with her swollen red eyes, filled with sorrow and accusation. Most likely as a mother mourns the loss of her child, she is accusing both the heavens and the earth for the pain she and her son has suffered. This interpretation of Mary is different from Michelangelo's Pietà or many other versions, where Mary is offering her child to the world. Bouguereau's Mary clutches Christ, not offering him to a sinful world that required her son's sacrifice. At Jesus' feet lies the crown of thorns used to mock him during the Crucifixion; it lies on a white cloth covered in the blood of Christ, showing the torment Jesus went though in order that humanity could attain salvation. The white robe and pitcher of water represent the purity of Jesus' soul. Both Jesus and Mary are surrounded by a halo of light indicating their holiness. This painting was inspired by the death of Bouguereau's eldest son, George, who died directly before Bouguereau started work on this piece in 1875. Bouguereau had the grave misfortune to have lost 4 of his five children during his lifetime.