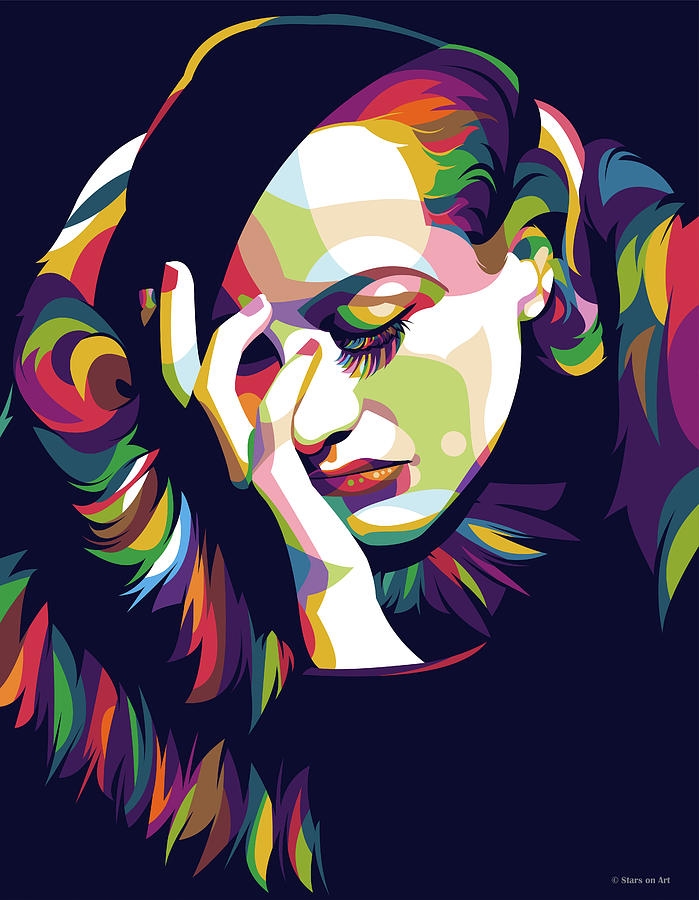 Joan Crawford is a piece of digital artwork by Stars on Art which was uploaded on April 16th, 2019.

Pop art portrait of Joan Crawford (1904 – 1977), a successful American film and television actress and was a top film star for nearly five decades. She succeeded due to a driving ambition, hard work, and remarkable adaptability.

With her films at Metro-Goldwyn-Mayer in the 1920s, she played diverse roles playing sympathetic and unsympathetic characters and realistic yet multi-layered performances. Her greatest success and most famous performances came from melodramas and romantic comedies. Still, her acting covered a broad range, from film noir and historical dramas to musicals or horror films. By 1999, the American Film Institute ranked Crawford tenth on its list of the greatest female stars of Classic Hollywood Cinema.

Growing up, she had jobs as a laundress, waitress, and shopgirl before starting a modest dancing career, until a scout from MGM offered her a Hollywood contract.

In the 1930s, Crawford's fame rivaled MGM colleagues, Norma Shearer and Greta Garbo. Able to portray flappers, Crawford could still play believable wealthy women in distress or hard-working young women who find romance and success. These types of characters and stories were popular to Depression-era audiences, and especially women. They made Crawford one of Hollywood's more prominent movie stars and one of the highest-paid women in the United States.

From her role in the all-female cast of 1939's "The Women," she earned critical praise. Her success continued with a performance in the melodrama "A Woman's Face" (1941), which garnered her further critical acclaim. She subsequently won the Oscar for Best Actress with her portrayal of the hard-working divorced mother in the
"Mildred Pierce." Crawford also received two Best Actress Award nominations as recognition for her work in "Possessed" (1947) and "Sudden Fear" (1952).

During the 1950s, she played mature femme Fatales. In the 1960s, despite being considered through in the business, she came back triumphantly in the horror genre with Bette Davis in "Whatever Happened to Baby Jane?" (1962), which once again gave her critical acclaim and box office success.

Although she never ranked among Hollywood's great sex symbols, nor has she been counted among the screen's most accomplished actresses; yet few in filmdom have rivaled her for star glamour and durability as a top-ranking celluloid queen. In "Mommie Dearest" (1978), Faye Dunaway impersonated Crawford in a screen adaptation of the book by that title.
(credit: Wikipedia)